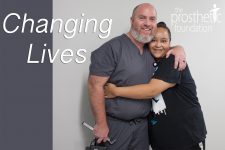 To provide support and access for uninsured or under-insured amputees to obtain quality prosthetics with comprehensive aftercare, and to generate public awareness for these individuals.

Restoring life, hope and independence through the ability to walk again.

The Prosthetic Foundation was established in 2010 as a 501 C (3) nonprofit organization to help uninsured and under insured amputees throughout Texas. The Prosthetic Foundation is committed to ensuring that amputees not only receive a prosthesis but also receive the follow-up care that is essential in the successful outcome of regaining mobility and independence. The loss of a limb can create a severe challenge and prevent an amputee from being able to perform the activities of daily living that many of us take for granted. The physical and psychological independence that a prosthesis can provide not only affects the amputee but can make a world of difference for their family and everyone around them. Having a prosthesis is also important in preventing additional health complications that arise from being sedentary in a wheelchair.

Loss of limb creates a severe handicap. For many amputees a prosthesis restores full mobility and resumption of normal life activities. In Texas, there are many people who remain handicapped because they cannot afford a prosthesis. Many people are uninsured or unable to pay their co-pay or deductible. Medicaid does not pay for prosthetic limbs. Prolonged wheelchair confinement dramatically increases respiratory and wound complications, risk of pulmonary embolus, and postoperative pain. Diabetes greatly increases the risk of limb loss. San Antonio has twice as many diabetics as any other city in America. The Prosthetic Foundation, which has recently moved its headquarters to San Antonio, exists to help amputees throughout Texas in need of financial assistance.
Did you know?

It is estimated that 1 in 10 amputees are unable to obtain a prosthesis due to financial difficulty, and in Texas, Medicaid does not cover prosthetics for adults. Depending on the level of function the amputee needs to regain, the cost of the prosthetic components can be high. A below knee prosthesis can be provided to an amputee up to $3,000, and an above knee prosthesis can be provided up to $5,000. Upper extremity prosthetic costs vary greatly depending on the level of amputation and function required.

Your support of The Prosthetic Foundation would be greatly appreciated and would be the first step in the journey of an amputee to take back their independence. Please help us give a hand to the amputees of Texas in regaining their quality of life!